Taking a Break for a While

Posted on 29 December 2015 by Adam Summerton

We’ve decided to take a bit of a break from doing game dev for a few months.  This is not a big deal, it’s just that real life is getting in the way and we all need to prioritise other things for a while (job, house move, imminent new baby!)

We will almost certainly still be doing Ludum Dare in April, but nothing at all until then.  Hopefully the break will be good for us, and we’ll all be super refreshed.  Next time I do a game jam I may be a Dad, so that’s equally exciting and...

Posted on 20 December 2015 by Adam Summerton

We recently submitted our 11th Ludum Dare game, an underwater exploration game called From the Sea, Freedom.  It was designed as a relaxing experience, with no danger or challenge.  We just wanted to do something where you can enjoy the atmosphere at your own pace.  We had a lot of ideas for making it into something more, so may work on it again in future.

If you’re wondering where the title comes from, it’s the motto of The Principality of Sealand, a micronation off the coast of Suffolk...

We completed our latest game for Ludum Dare, it’s called Brood and you can play it on our games page or over at itch.io here.

It’s quite hard to explain what the game is, but I suppose we’d better try…  It’s a drag and drop monster management game, you need to try and carefully place eggs on the floor of the cave and feed the baby monsters when they hatch.  You’ll need to keep them safe until they’re big enough to leave the nest, then fling them out into the world.

The original idea was...

Hello and welcome to all 7 of our subscribers (Hi Mum!). Today I want to take just a moment of your time to talk about InfiniQuest…

InfiniQuest was a game we made last year for ProcJam, and it’s playable here on our game page, or over on itch.io here. There are also links to articles here on our press page. In other amazing news that I totally missed last year, PC Gamer included InfiniQuest in its list of Top 100 free games here. Ridiculous.

We finally managed to get all members of the team together to participate in Ludum Dare 32.  The Theme was Unconventional Weapon, and we had 3 men and 1 cat fully committed to the cause.

We came up with a game called Miyu, about a moon spirit living in a strange lunar world.  The idea was that spirits from the sun world had sort of invaded, and you had to trick them into going back to their solar world.
Your unconventional weapon was the plants and environments around you, and you used... 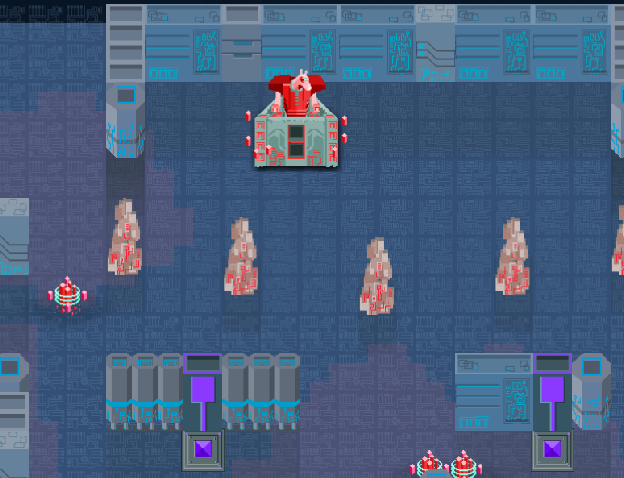 A 2-man effort from me and James, Alpha Circuit was probably not one of our best entries, and once it was finished neither of us had any desire to carry on with it.  The theme was Entire Game on One Screen, and we...