We completed our latest game for Ludum Dare, it’s called Brood and you can play it on our games page or over at itch.io here.

It’s quite hard to explain what the game is, but I suppose we’d better try…  It’s a drag and drop monster management game, you need to try and carefully place eggs on the floor of the cave and feed the baby monsters when they hatch.  You’ll need to keep them safe until they’re big enough to leave the nest, then fling them out into the world.

The original idea was to make a game where it would be fun to just hurl the monsters around, as well as the humans and food etc. We felt like that would be what made it fun to play the game, the tactile feel of dragging and throwing objects, and a sort of physical comedy to things bouncing around (with the odd skill shot to throw some food off two walls and into a monster’s waiting mouth). I think the end result was both a success and a failure; it was a success because it did work and it did feel pretty fun, but it was a failure because it wasn’t really encouraged in the gameplay.

The monster management side of the game did work well, although we struggled to get that across properly to the player.  Once you get it then it’s quite a frantic game of managing priorities and quick mouse reflexes.  The graphics and the audio worked really well too; we all felt this was our most polished game to date, and that it felt close to what feels like ‘our’ style.  It was also a very strong match for the theme, which is not something we always manage during Ludum Dare jams.

For anyone wondering about the plot, it went like this: You were playing as the mother monster, and you were meant to release enough healthy babies onto the surface before the humans nuked you.  The idea being that if you sent enough monsters out they would overrun the humans and take over the planet, and if you didn’t then the army would sweep up the remaining monsters and win the day.

We did a much more in depth write up on our Ludum Dare, which you can read here. 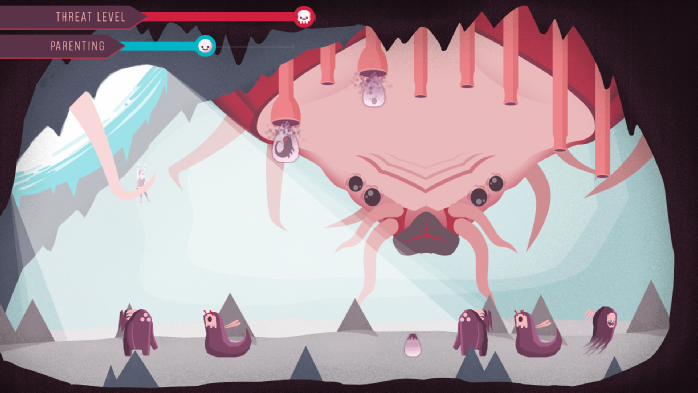