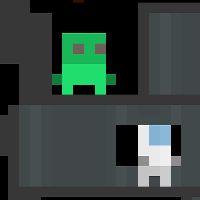 I had a bit of time in the evenings over the past week, so I decided to make something for #LowRezJam.  The only limitation for this jam was the resolution; it had to be 32x32 maximum, with no tricks or cheats.  I initially found this really limiting, but quite soon after starting I began to enjoy it a lot.  In the end I found the limitation really helped with my terrible art abilities; I was flying solo this time and I always find it easier to work on games when they have the beginnings of an identity or atmosphere.  So no pretty papercraft art this time, as 33% of the team are recovering from eye surgery (get well soon James!)

The game is about a one-man alien army trying to destroy all humans.  You play a tiny green dude, and you pilot your little flying saucer around looking for trouble.  When you near a human ship you can eject from the cockpit and board it.  The game then switches to a sort of space-ninja mode, where you can use the combination of your teleport and laser eyes to take out the astronauts and blow up the ship.  The main reason for playing as the alien is that I wanted laser-eyes.  Teleportation is something I've used in previous games, and a mechanic I really want to expand on soon (for some reason I just love teleporting)

Anyway you can play the game here on our site, or over at the Game Jolt jam page here.